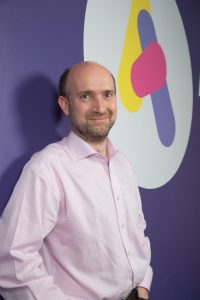 Learnings from the global FinTech Innovator

Edward Twiddy is one of the founders and Chief Innovation Officer of Atom Bank. Atom Bank is the first UK bank built exclusively for mobile and it is ranked the sixth leading global FinTech innovator.

When talking about Atom Bank, Edward brings the parallel to the James song from 90s: “We were born of frustration and we keep that frustration close to us, as it is the way to continue reshaping. We want to be the business that never stops surprising.” This relentless desire to innovate echoed through our entire interview.

How do you explain Atom Bank to an eight-year-old in maximum three sentences?

Atom Bank is a brand-new bank that allows you to use your face or voice to get into your money wherever you want or whenever you want to.

What are 2-3 concerns about Atom Bank’s future that keep you up at night?

My children keep me up at night ???? Regarding Atom Bank, it’s three Cs: customers (doing right by them at all times), cyber threats (it really is a war out there) and capital (the lifeblood of any start up).

How have you convinced your teammates to do something they were not keen to do?

At Atom Bank we haven’t had to face such a situation, as our people are willing to produce very complex math calculations at one moment and help to clean up the kitchen the next. We don’t allow peoples’ roles to be defined.

The best way to explain it is to bring a parallel from football world. In Dutch team, every player plays equally in all different roles. They never won the world cup, but they have entertained a lot of people. Dutch play is much more enjoyable than that of other teams where roles are very clearly defined.

Which functions/areas in financial industry will not likely be replaced by FinTechs, simply due to the basic human nature and human needs?

Financial sector has been through many revolutions and technology has been applied there for decades. Sector is currently attacked throughout the value chain. I believe that humans are by nature interested in innovation and that’s what leads us to progress. As such, I struggle to find any areas that shall not be transformed by FinTechs.

You’ve been given an elephant. You can’t give it away or sell it. What will you do with the elephant?

What is the misconception people have about you?

They might think that I’m a banker, but I’m not. I work in the bank, but am not a banker and am rightly kept away from the real process of banking. In truth I am actually a bit of a dilettante and mostly I think about what’s coming next.

If you could only choose one song to be played every time you enter a room for the rest of your life. Which song would it be?

Johnny B. Goode by Chuck Berry (https://www.youtube.com/watch?v=ZFo8-JqzSCM)  – the greatest rock and roll track ever.